Juliet E McKenna is a British fantasy author living in the Cotswolds. Loving history, myth and other worlds since she first learned to read, she has written fifteen epic fantasy novels. The Aldabreshin Compass Series, now being reissued in ebook formats, explores an absolute ruler’s dilemma when his armies and authority cannot counter devastating magical attack.

This turns out to be a surprisingly tricky question because thinking back to my earliest independent reading in an English primary school, I was drawn to fantasy and historical fiction very early on, through writers like Rosemary Sutcliffe and books like The Boy with the Bronze Axe. All my favourite stories had male leads. There were usually girls around them and I distinctly remember wanting to know more of their stories but that so rarely happened. It wasn’t till later that I discovered Noel Streatfield’s girl-centred stories and books like Little Women and What Katy Did.

Giving this considerable thought, I realise that the first story to satisfy my wish for girls sharing an adventure on (nearly) equal terms was The Horse and His Boy by C.S. Lewis. That’s where I encountered Aravis Tarkheena – and her mare Hwin, another independently minded female character who doesn’t care two lumps of sugar what other horses might think of her rolling on the grass when she gets back to Narnia.

Aravis took charge of her own destiny. Even at the cost of being prepared to sacrifice her own life rather than be forced into a vile marriage, at least until Hwin intervened. That’s significant too; Aravis wasn’t stupidly stubborn. She was ready to listen to reason and to take a different road, all the way to Archenland. She wasn’t stupidly impulsive either. Aravis planned and prepared her escape, using her wits. When events took unexpected turns, she adapted and went onwards, learning all the way. I really, really liked seeing an intelligent girl who made things happen rather than waiting to have things happen to her.

She’s very much in the same mould as (almost all) the women I write as protagonists and point of view characters; Livak and Halice in the Tales of Einarinn, Risala and Janne in the Aldabreshin Compass, Failla, Larissa and Branca in The Lescari Revolution books. They’re all pro-active and decisive, using their skills and wits to get what they want or to get themselves out of trouble. Even Zurenne in The Hadrumal Crisis eventually learns to stand on her own two feet and to make her own choices after a lifetime of deferring to men. 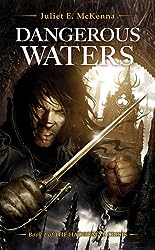 And while Aravis ends up married to Shasta, they’re friends first of all – even though they’re still often quarrelling long after they’re married, according to the book’s final page which I’ve just gone and checked. There’s a very good chance my characters’ relationships owe something significant to that. Friendship is the foundation of every solid romance in my writing – and that never means my female characters giving up on their own ideas, even when some difference of opinion causes tension.

Bonus round: How do you feel about the word heroine? In these posts, I am specifically looking for female authors’ female influences, whether those women they looked up to were other writers or Anne of Green Gables. Does the word heroine have a purpose that isn’t served by equally well by hero?

The older I get, the more I find the term ‘heroine’ problematic, in terms of fiction at least. Because it seems to be so inherently and indivisibly part of a pair; hero and heroine – and the hero always comes first. The heroine is defined by that relationship with a man above anything else. Her choices and motivations are driven by the actions and needs of lover, husband, son or father. Which isn’t to say these motivations can’t be as complex and varied as anything else when it comes to driving a story but since my teens, I’ve wanted female characters in my reading to be doing so much more than that. Female heroes.

That’s why, when it comes to personal heroines – or female heroes – in terms of epic fantasy writers, I so very much admire Anne McCaffrey, Elizabeth Moon and Melanie Rawn. Their work is full of strong girls and women making their own choices, and dealing with the consequences on their own terms, even when those decisions turn out to have unexpected, awkward or even dangerous consequences. These characters can and do have romantic and family relationships but those are facets of their lives and personalities, not the be-all and end-all of their stories. More than that, these women remain distinctly feminine, not sacrificing their own integrity by merely attempting to out-macho the men (Something I’ve seen described as ‘faux-male’ behaviour which I think is rather neat.) Reading these writers assuredly had a powerful influence on my own work.

About this post: The Heroine Question is my name for a series of short interviews with female writers about their favorite characters and literary influences. Clicking the link will allow you to browse all the other interviews, with awesome people like Leah Bobet, Alex Bledsoe, Marie Brennan, and Kelly Robson. Or, if you prefer something more in the way of an actual index, it’s here.