You Are Here: Home » CinZo 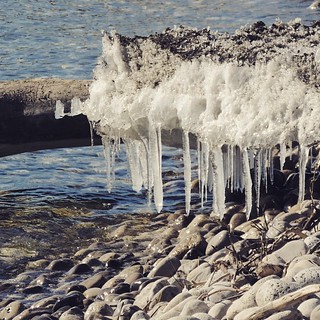 Yesterday I threw together a quick post about how things have been filled with what we around here, semi-ironically, call virtue: writing, teaching, flossing, hard work, tax accounting, healthy food, yoga, and sincere attempts to get 7-8 hours of sleep a night. I wanted to let you all know I hadn’t died or forgotten how to blog, more than anything.

Now I want to just as quickly throw together a note about a few attempts, made recently, to tarnish up that hardworkin’ halo. Because what that kind of behavior gets you, eventually, is burned the fuck out. I know it, you know it. (The cats, they don’t know it. This is because they get halo points from activities like stealing lettuce, one leaf at a time, out of the salad bowl and licking it to death in various corners of the apartment.)

Fun things! I bought us tickets to see Second City’s How to Kill a Comedian. We went on the Thursday before the long weekend; it was like a sketch comedy version of all the political things that sift up in my Facebook feed. Laughs were had. Also bellinis.

Kelly and I also went to a very convivial gathering of writers and book lovers on Good Friday,in a part of town we hadn’t seen.

Marine disasters! I am reading Eric Larson’s Dead Wake: The Last Crossing of the Lusitania

aloud to Kelly in some of our downtime. The kittens join us on the bed and roll around looking adorable while we learn about people getting torpedoed, sunk, and drowned.

Lakefront birding! Part of my necessary mental process for writing requires a certain amount of walking around outside, staring blankly at things like the lake. To that end, I finally made it to Humber Bay Park East a couple weekends ago, and shot many icicles as well as this red-necked grebe and some other birds. 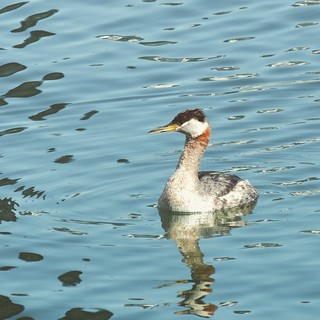 It turns out this is the park I’ve been looking for since I got here: big, easy to get to, bird-infested, open seven days a week, and with deliciously varied terrain. Barb and I used to go to Jericho Beach every couple of months to chase bunnies, raptors, warblers and hummingbirds. This has a very different look, of course, but there’s a similar feeling and I am excited about exploring it more.

is on. It has Damian Lewis as Henry VIII. If this is news to you, I totally understand if you need to go hyperventilate into a brown paper bag now. OMG, OMG, OMG.

According to my handy-dandy day-counting app, we’ve been here for 565 days now. I’m poking my nose into my second Ontario winter, and am curious to see how I feel about it now that the cold and snow lack, a bit, for novelty.

What’s far more significant to most of us about this time of year is less the dig for coats and toques packed away months before, and more the monolithic rah-rah-Christmasness of it all. December has come again, bringing with it three stat holidays configured, this time ’round, into one four day weekend and a Thursday off the following week.

Needless to say, this probably won’t be the most sentimental Alyx and Kelly Christmas ever. We’re never very sentimental, are we? There will be firsts: our first holiday with CinZo (and sans Rumble), the first in the new apartment… ah, that may be it.

The plan, such as it is, is to eat a couple nice meals out and see if we can find several amazing movies to see. Got any candidates? Anyone here a fan of doing a matinee on the 25th? 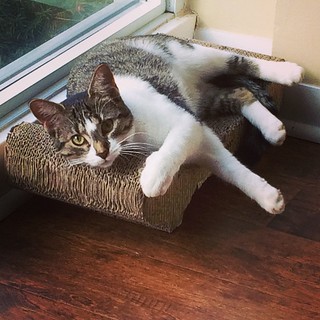 CinZo have gotten their present already: having failed numerous times to make the $3 cheapo versions work–and straining my hand in the process–I ordered a pricey and thoroughly awesome laser pointer that doubles as an LED flashlight and a UV flash too. (What does one do with a UV flash, exactly?) It debuted yesterday and we ran the kids up and down the apartment, up and down the cat tree and in circles until they were heaving with exhaustion.

There will, inevitably, be footage of this as soon as the right lighting comes my way.

Last night I read at the regular ChiSeries event, along with Sarah Tolmie, Charlene Challenger, and Errick Nunnally. (I noticed, but forgot to say, that all of us but Errick read pieces that eventually took their characters to big empty rooms with mattresses on the floor, which seems an odd coincidence.)

I wasn’t sure how many people would make it, what with Worldcon just having ended, but a fair number of the usual marvelous suspects were there. Hugs were exchanged, socializing happened, the food and music were good and as usual Kari Maaren and Peter Chiykowski sang original genre-themed songs between the readers.

(This isn’t the song Peter sang last night, but it’s a good representation of what I’ve heard of him.)

Other things that have happened recently…

Two friendly, burly guys came by Monday, took our apartment door right off its hinges, and vanished with it to the parkade for an hour before reinstalling the thing. If you ever want to feel weirdly vulnerable, try out having no front door for awhile. All of this was in service of trimming the bottom of the door so that Kelly and I can get out and in reliably. (I can’t remember if I told you all about some of our recent adventures in having to have the door kicked in, OMG, on one occasion, and on another having our floor installer break in through a window when the door proved too mighty to be kicked.

The repair process isn’t quite complete–the jamb needs some work, too, it turns out. But it should be soon. Friday soon, is the plan. (And then there are other little things – a closet door, the dishwasher… ah, new homes.)

Anyway, it will be nice to not worry about getting trapped inside or outside the house sometime.

I gave in to curiosity and weighed Lorenzo this morning, and he’s 7.8 bristlin’ pounds to CinCin’s still-wide-eyed 4.7. He is all string and muscle and teen boy attitude, with no cush whatsoever. When he comes to me for love, he rolls off my upper body unless I brace him–he’s so taut he can’t melt into me. Imagine having a warm medicine ball, with whiskers, trying to make itself comfortable on your ribcage. 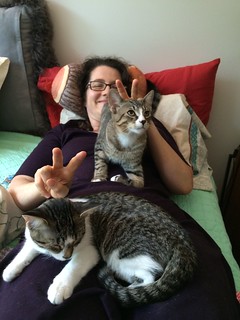 He spent 20 minutes this morning trying out various poses, and eventually discovered that if he lay parallel to my collarbones and braced his weight against my throat, he could hang out for awhile. It was so delightful to be snuggled that I let him do it. What’s a little asphyxia when set against the goal of having cats who are abundantly physically affectionate, right?

Runt (though she weighs over 2 kilos now, CinCin was definitely the runt of her litter. She got weighed on Wednesday during her abortive spay attempt. We haven’t tried to weigh Lozo lately,  but he’s at least a third bigger. And feels like warm, muscular concrete.)

Either/Or/Both:
Flip and Flop
Fric and Frac
Thing One and Thing Two
i Bambini

I know you all needed, desperately, to know this.

We also need to come up with an alto part for the Parry Gripp song “Weiner Dog,” because CinCin comes running whenever we play the video or sing it ourselves, and I think hearing it in two part harmony would blow her tiny little mind. She likes things with soprano notes, go figure.

KC of Luna Station Quarterly has interviewed me about all of my books and about writing generally. If you haven’t looked at LSQ before, it’s worth checking out.

Chinchilla went for a certain operation last night; our vet kept her for fasting and prep, and will fix her today. Lorenzo was allowed, therefore, to actually sleep with us. (I figured that left all alone, he’d cry at the bedroom door all night). He behaved very well, and was gratifyingly snuggly. And apparently he’s sticking too close to Kelly, because I hear the unmistakable sound of a cat almost getting stepped on as I write this.

It’s stunning to think that these two have grown from near-adulthood from this: 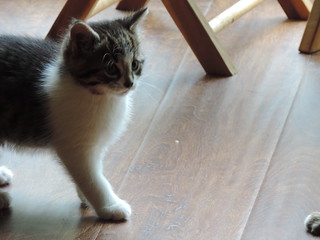 The plan is to pick her up, stitched up and good to go (and possibly with a cone of shame on her head) this evening.