You Are Here: Home » Food and Drink

It is a warm, rainy and potentially thundery Monday morning as I write this, rain-drenched and delicious. We spent Saturday bumbling around Prince Edward County, exploring wine country with our friend Linda. Relaxation was had, a good thing because a big chunk of Sunday went to itemizing receipts from our 2013 move from Vancouver. The government would like to verify that lunging across the nation required a bit of expense.

Exploring wine country was a delight and, naturally, I took many pictures. It’s really exciting to realize that you can go either east or west and be in a vineyard in around 90 minutes, traffic permitting. I didn’t taste much, but I did have a few sips at the County Cider Company in Picton. Mostly it was nice to have a short road trip and a chance to explore.

Here’s a little structure that made me think: DIY Ancient Ruin… 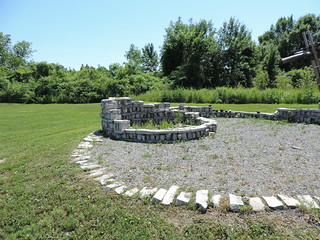 I am pro cheese. If you were to ask me to articulate a political position on cheese, in all its full-fat, salty glory, I would definitely be hitting all the available Like buttons, possibly while shouting: “Up with cheese! Go NDP Go!” The two main purposes of wine, as far as I’m concerned, are first that it makes cheese tastier and then that it helps you chill out after a tough day of not reformatting your co-workers’ hard drives (or brain stems) with a crowbar. I tell you this because Badger, in response to my “Tell me what to write” plea, said this one thing: Cheese!

I know what you’re thinking. After “Yum,” how much more is there to be said?

In 2009, I volunteered at Cheesecamp, which was an offshoot of a delightfully nerdy wine event called Vinocamp. Volunteering meant emptying spit buckets of red wine, mostly. In exchange, I got to sit in on sessions designed to edumacate my cheese palate. Samples were provided. It was a fun day.

Ninety percent of what I remember learning, from the Benton Brothers presentation mostly, was the thing that put me off mass-produced cheese by the brick, of the sort that you’d get at your local Safeway, (a chain we don’t actually have in Ontario). Don’t get me wrong, the edible material of which I speak isn’t made of kitten toes or anything. You can read on without fearing regurgitation, unless you truly are a delicate flower. You will not have to march on any Hill or storm a dairy to liberate a big-eyed animal after I’ve shared this with you.

But! The gist was that for good public health reasons, the government forbids us to ship huge amounts of fresh milk–even if it’s pasteurized–any significant distance. In order to make the massive quantities of cheese-like product required by the big grocery chains, what producers do instead is acquire powdered skim milk and vegetable oil, mixing the two with water to reconstitute an allegedly milky substance. To this they add salt, bacteria, rennet and eventually packaging and a bar code.

The oil, which stands in for the fat that’s been removed from the milk flakes, is the reason why the cheese you find in the non-boutique part of the grocery–cheese which isn’t even all that cheap, I hasten to complain!–will express drops of oil if you leave it out at room temperature.

So! Not horribly gross, I know. Just a little. But I take this as my license to say: Hey, when I want to drink canola, I’ll swig from the bottle, in the time-honored fashion of my ancestors. (Or was it ketchup we drank that way?) In the meantime, my cheese when I lived in Vancouver came from La Grotta Del Formaggio, mostly, and sometimes Les Amis du Fromage. Here in Toronto, we surveyed our cheese options carefully. Kelly now makes a weekly run to the St. Lawrence Market to stock up on our house table cheese*, which is currently a honey goat gouda. We’ve also gotten a pretty tasty rougette there, recently. I do sometimes just gotta have the award-winning La Sauvagine, which one of the Marias at the Grotto described, famously, as “Jesus sliding down your throat in satin pants.”

I will close this entry by mentioning that:
One: I am still looking for topics from you all. If I can do cheese, I can do anything!
Two: If the above sounds like the smuggest thing to blaze across the Internet, it is almost certainly because I drafted it in my condominium hot tub.

*What? Of course we have a house table cheese. We’re terribly refined here at Dua Central.

Yesterday I went prowling through our tickets and realized that I had not, in fact, bought tickets to see London Road on Saturday. No! I had bought them for Friday, which is also the evening of Debra DiGiovanni’s Late Bloomer performance.

The horrors! I hyperventilated for about an hour before I remembered that probably if I just phoned Canadian Stage and asked to change the theater tickets, they’d say yes. (Because, OMG, alyx, calm down.)

And in fact that’s just what we did. They were supernice about it, of course. The Canadian Stage guys, in case you’re all wondering, seem to have excellent customer service. One gets off the phone feeling as if you could ask them to swing by with a juggler, a pony, a dance troupe, Ian McKellan and someone to wash your windows and they’d be all: “Sure! Can we do anything else for you?”

Drama over drama aside, the anniversary staycation is coming along nicely. We had a stunning meal out Wednesday night, and we’re going back to AGO this morning to take in the Guggenheim exhibit again. Tonight is the stand-up comedienne, tomorrow the matinee, and after that I’m doing a photo shoot at the aquarium with the Instagram crowd.

As for Sunday, we’re going to the Royal Ontario Museum with one of our oldest friends and then hanging out with her all day. To cherry that sundae, we’re going to book a spa thing for Monday: it’s a “taking the waters” type bath circuit at Body Blitz.

What I overheard: “Well, if we can’t find a Priest, we’ll have to go looking for a Hero.”

Sounds very Dungeons and Dragons, no? Real world adventurers, off to find a cleric to help them slay a dragon. And yet they didn’t look like the sort of people one should stalk with a camera, in case a mystic fight broke out.

One such chain is The Burger’s Priest. And another is Hero Burgers.