The tl;dr version of this story is: I mentioned to a few people that I’d written the Prime Minister last week, and they asked what I said. Here’s the text, with the PM’s address in case you want to add your voice to the chorus. Postage is free, but if you’re like me you’ll forget that and stamp it anyway. If you’re a lot like me, you’ll use the Captain Kirk stamp.

I am writing today to ask for reassurance regarding Canada’s response to the rise of fascism in the United States.

We are of an age, you and I, and it doesn’t seem much of a stretch to imagine that you may have spent at least a few moments during your teens wondering if the USA and USSR were going to blast each other–and everyone else in the process–to cinders. There were many great things about my youth, don’t get me wrong, but when I revisit its darkest moments what I remember is worrying about nuclear war and wondering if I’d be murdered by homophobes. How strange it is to find both concerns rising from their graves, so many years after the fall of the Berlin Wall, more than a decade after Canada’s Supreme Court ushered in the era of marriage equality.

I’m not a starry-eyed idealist, Mr. Trudeau. I understand that the PM of Canada has to play nice with our massive, rich, powerful next door neighbour. We are the weak partner in a very unequal relationship; our ability to resist the whims of the U.S. has generally rested on being charming and compliant. I know you’re in a difficult position and I don’t envy you.

(I also know, full well, what it is to stand up to a volatile bully and get kicked down a flight of stairs for trying to stand on principle. Compliance is seductive. It can seem less damaging. The bruises are less visible, even if the cost of compromise comes straight out of the nation’s collective soul.)

So I wonder, as Canadian racists become emboldened: what will my government do to stop them? Expose, arrest, and prosecute? Or will we start quietly letting the outrages, the acts of vandalism, and the assaults slide? I wonder: if U.S. Muslims have to flee Iowa, or Kansas, or Detroit, or Texas: will Canada have the courage to take them in?

Will we play the role of Neville Chamberlain in the 1930s; will we weasel and attempt to appease? Will we be Vichy France, and cheerily hand over all our undesirables? Will we be remembered for being courageous, or for being spineless?

I’ve struggled in the past couple of weeks as I tried to figure out how to break it to my terrified American friends that fleeing here, in a pinch, if they can, might not give them the safety they imagine. I’m looking at pictures of swastikas on synagogues in Ottawa, and wondering if our authorities are going to let that stand. I believe in the Charter of Rights and Freedoms. I want to believe that my government does as well. That when push comes to shove, those words are held dearer than the paper they’re printed on.

Please tell me that whatever happens, win or lose, we will accept the refugees, take the economic hit, prosecute the racists and–if dire necessary requires it, as I daily pray it will not–go down fighting. If that’s something you feel you can do you will, if nothing else, magically transubstantiate one die-hard lesbian socialist into a bona-fide Liberal voter.

Writing an elected representative or a newspaper is a political act you can make from your couch, even when you’re running a fever. If you’re trying to do one thing a day to make the world a better place and you’ve just got no goddamned bouncity-bounce, do this.

I have an article about thrillers up on Tor.com, and in it I talk about Sorcerer’s Legacy as well as some of the more manly-seeming novels I read in my teens. There’s a bit of a comments thread, some of it defending Clive Cussler because I took a wee poke at his grasp of international politics. Check it out; join the fun!

Excerpt: Jason Bourne may have a touch of amnesia, sure, but at the end of the day he’s still a blond-haired, blue-eyed, multilingual killing machine with a box full of unmarked currency, operating in a world that expects a dude to be able to throw a punch. Elienne is a pregnant widow in a royal court that figures a lady probably shouldn’t be heard unless she’s rockin’ the pianoforte. Who would you rather be if everyone within earshot wants you dead?

And while I’m talking about books I read in the Eighties that had some serious staying power, here’s the cover of Paula Volsky’s Illusion,  a fantasy retelling of the French Revolution. Anyone remember that one? 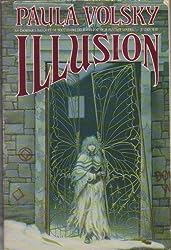 I have a post up on Tor.com called “Where to Start with Connie Willis.” The title’s self-explanatory, and there’s a lively conversation in the comments thread about how communications technology does or doesn’t fit into her work, and whether the age of the smartphone has left Willis’s main body of work looking somewhat dated… and also, of course, how much that may or may not matter.

In completely other news, Child of a Hidden Sea

is on the Sunburst Award Honorable Mention list, in the YA category. Peter Darbyshire of The Province has a write-up on some of short list folks from B.C. here.

Darbyshire, by the way, also writes as Peter Roman and when wearing that hat he is the author of The Mona Lisa Sacrifice, among other fabulous things.

Kelly and I are heading out tonight to see the National Theater in HD and Helen Mirren broadcast “The Audience.” I tell you this mostly because I am feeling “Three Things make a Post”-y.

I am still a bit behind on e-mail, but catching up bit by bit.

Okay, not really. But the essay this week is called: “Mom, the stork brought a howler monkey!”

Xander gets a not-actually-evil twin and does the Snoopy Dance. I wrote about it in the usual place, at the usual time.

I am more than halfway through the rewatches now and I know that some of you visit them via the links here but aren’t big on joining the Tor comment threads. This is, of course, totally fine! But if you have something to say about the rewatches or the show, or anything BtVS related, do consider yourself invited to do so.