Sunday marked my fiftieth birthday, and I thought I’d celebrate by telling you all about my latest Curious Fictions story, “A Slow Day at the Gallery.” Like “Ruby, in the Storm,” this short story is one of the Slow Invasion series, a collection of snapshots depicting humankind’s effort to join a wider community of spacegoing races. It’s about trade-offs and difficulties involved in being, in each of these relationships, the lesser among very unequal partners.

Colonialism and imperialism are themes I’ve been returning to, lately, in my work. It has been nice to revisit these earlier efforts in that direction.

In “A Slow Day at the Gallery,” an old man travels vast distances to visit his favorite Monet painting, one of the Waterlily Pond series, at the Tsebra art gallery where it now resides. Humanity thought they were lending the painting to the offworlders; there was a disagreement about the exact meaning of ‘loan’, and now things bid fair for the Monet to remain offworld for decades, centuries… or possibly forever.

Outside the authentic human museum with its authentic humidity-controlled air, he felt himself reviving. They passed into an ornately carved walkway, lined with windows and meant to communicate with the sensitive feet of the Tsebs, a lumpy obstacle course of knobs and gaps. Christopher’s ankles ached as he struggled to traverse it without falling. Just another hurdle, he told himself, like ducking the police or smuggling his false ident out of humanspace.

The story appeared in Asimov’s SF and was picked up by David Hartwell for his Year’s Best SF series. It was very much inspired by my first trip to the Art Institute of Chicago, in 1997, where I saw my first Monet painting and realized something a print will never tell you–just what all the fuss was about.

Support my fiction by tipping at Curious!

As I’ve mentioned elsewhere, I set up at Curious Fictions just after Patreon tried to change its funding model, in a way that adversely affected many of my friends and colleagues. Donor-funded artists benefit from a diverse crowdfunding ecosystem, and I like the way Curious Fictions works. You can read any of my stories for free and, if you wish, set up an account and offer a tip. If you want to be first to hear about my new offerings, you can subscribe–pay as little as a dollar a month, and you’ll get at least a story a month, and my endless thanks.

My previous Curious Fictions offerings are a time travel story, “Three Times over the Falls” and another Slow Invasion story, “Ruby, in the Storm.”

Susan Palwick has begun a practice (inspired I believe by Terry Windling) of posting the three best things about her day on Facebook. I don’t think I could do this every day, especially not this week, but here are three lovely things about some random weeklike period before my cold germs set in.

One: Kelly came home with sushi last night so I wouldn’t cook, and dinner was therefore not only consumed but cleaned up by five o’clock. We immediately hopped up and hauled our butts to the Art Gallery of Ontario, even though it was closing at half past, and spent twenty glorious minutes getting acquainted with Silke Otto-Knapp, who paints eerie monochrome and low-contrast watercolor images on canvas. Haunting stuff–check it out! They booted us out when they closed;  we snuffled around the store and came home. We’d had a full day and a sublime artistic experience, and there were still had four hours of evening left to us.

When we moved to Toronto, we were in search of many things, including the shortest possible commuting time, for Kelly, from her job. This, in a nutshell, would be why.

Two: A call to boycott my publisher, Tor Books, for spurious political reasons has spawned a simultaneous buy-cott. The Twitter hashtag #TheTorYouKnow is filled with recommendations for great books by many terrific writers. If you want to support Tor or its authors and are flat broke, you can! Some of the Best from Tor.com 2014

is available in the Kindle store for free. It’s got my story The Color of Paradox

in it, along with so many other great things.

As you’ve probably noticed, I fucking love it when people turn their backs on any kind of hatred, conflict or wankage and instead channel their attention, positive energy and in this case cold hard cash in a concrete and helpful direction. I’m betting and hoping that after this particular surge of activity subsides, we’ll all  expand the conversation, so we can talk about great non-Tor authors and publishers who also deserve our clicks, tweets, eyeballs, rave reviews and money. This hashtag, and this buycott, are necessarily about the thing going on today. The wider conversation… well, it encompasses more of us, and I don’t think anyone has forgotten that.

Three: I like to think I’m an optimist, but I’m perilously cautious. I didn’t believe marriage equality would happen in my lifetime… until about three minutes before it was obvious I ought to start planning a legal wedding. Every time the world gets better, in some ephemeral or quantifiable way, part of me is a little surprised. Hoping for the best while keeping expectations low is self-protective, I know. Anyway, the first episode of Sense8 surprised me. There are things about Nomi Marks and her relationship with Amanita that reflect my queer life in ways I’ve never seen on TV. I never expected to see Pride and the gay community, as I’ve experienced it on the flicker box. Blow me down, folks.

Feel free to share if anything rocked your week.

New York Comic Con was an enormous, delightful, fan-filled spectacle of an experience, and I was thrilled to be able to go there, to meet some readers and get to know all of Team Tor a little better. I got to talk magic systems with Sam Sykes, Ilona and Gordon Andrews, Kim Harrison, George Hagen and Jeff Somers at a standing-room only panel. I signed books, gave out Child of a Hidden Sea

buttons, and met a lot of people who had, previously, been e-mail contacts.

In and around the event, Kelly and I visited The Frick Collection, the Met, Chelsea Market and the High Line. We saw Cabaret, with Alan Cummings, at the former Studio 54. I tried on some dresses at the Desigual store, but failed to commit to any of them, and walked through Central Park a couple times. In the process, I got a much much better sense of where things are in Midtown.

What else? We ate many pastries, and actually saw Times Square both by day and by night. (Our decision to skip it on the previous trip was more or less borne out, but I admit I wasn’t entirely immune to the glitter and flash of it all.) We drank much coffee at Gregory’s, and much better coffee at Blue Bottle, and discovered that the Food Network has a fantastically beautiful loading dock of all things:

On Sunday we went to the Morbid Anatomy Museum in Brooklyn with Ellen Datlow, Rick Bowes and Terence Taylor, and then we looked around the neighborhood (which includes a superhero supply store!) for a little before going back to our new digs in the West Village.

Then on Monday we flew home to two well-cared for but pleasingly happy to see us kittens. By then we were in such kitteh withdrawal that, despite having been favored with a bit of love from the cats at our Air B&B, we were watching the Greatest Hits of the Kitten Channel on Kelly’s phone during take-off.

Today I am shaving 260 words from one of the squid stories*, so I can send it to a market with a firm 7.5K word limit. I can tell I’ve been through the story before. There’s not much to trim. It’s tempting to simply change the word count at the top of the page and assume they don’t really care about that extra half page or so.

But that would be errant smart-assery, not to mention unprofessional. Even if I weren’t generally rule-abiding, I know it makes me nuts when my students blithely ignore my guidelines. So–a sentence here, an adjective there. Nip, tuck, smooth.

Next weekend I am one of a bunch of Tor authors heading off to the New York Comicon, so I’ll continue working on these little bits and bobs for awhile yet. I’ll shoot a few stories off to market, push paper on a grant application, comb through the files looking for reprint opportunities, that kind of thing.

But this Saturday is my (so far) favorite Toronto event, Nuit Blanche Last year we made our way through the throngs to Nathan Phillips Square, and back, and saw many awesome things. Then we were home, in bed and exhausted, just as the party was properly starting. 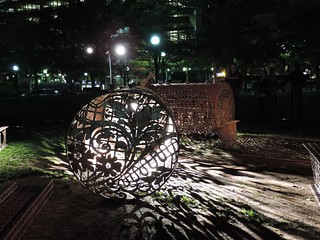 This year we are practically at City Hall the minute we step out our front door. So I hope to see even more incredible sights and performances before thronging home to collapse at some ludicrous hour like ten.

How about all of you–what’s on the boards for October?

“Five Good Things about Meghan Sheedy,” in Strange Horizons, and “The Town on Blighted Sea.” (The latter is also in The Year’s Best Science Fiction: Twenty-Fourth Annual Collection

)
“The Sweet Spot,” in Lightspeed and Imaginarium 2013: The Best Canadian Speculative Writing

.
“Time of the Snake,” in Fast Forward 1: Future Fiction from the Cutting Edge 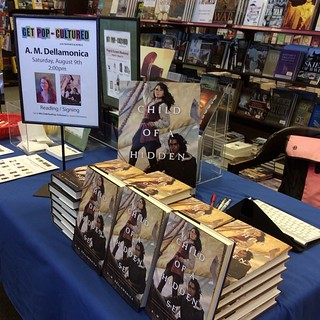 My weekend tour of upstate New York went very well: the folks at both bookstores were lovely and welcoming, and I was delighted with Buffalo and Rochester. The high point was, as always, getting to talk to readers and fans in both cities. One fellow brought in the book he’d bought the week before. He knew I was coming, but he couldn’t wait to start reading Child of a Hidden Sea

. This is, of course, the kind of thing an author hopes to hear hear everywhere we go.

There was some great food and good exploring to be hand, and the next best thing was the Albright-Knox Art Gallery in Buffalo. This gallery has a mind-bogglingly wonderful collection, and Kelly and I spent two hours boggling at one thing after another after another.

As we usually do, especially if there’s a border crossing involved, we left ridiculously early on Saturday morning. It’s one of those “just in case” things that you feel a little sheepish about. And indeed, we were super-early for my B&N appearance in Amherst. But then on Sunday it took six hours to get home, which completely vindicated the ludicrous overachieving.

It was wonderful to get away and see new things, and the cats were extremely well cared for by a neighbor (the one who told us about their existence and need for a home in the first place.) So much goodness and good fortune! I am feeling very blessed.