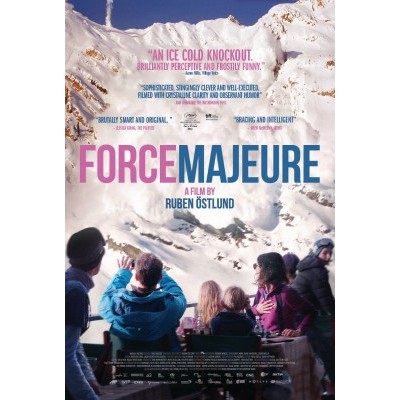 Kelly and I have been in foreign film withdrawal since the festival, and so when the Lightbox got this movie, we checked out the preview, and then beetled down John Street with all haste to see it.

I’ll start with the downside: this thing moves slowly. If you’re even slightly in the mood for action, this is not going to be the film for you. They come, they ski, they argue. There’s an avalanche, and you’ll be on the edge of your seat more than once, but it’s no thrill-ride.

What it captures is a nuclear family in the middle of an unlooked-for, necessary, and unattractive power struggle, wrapped in a version of that oft-told real life situation where a vacation that everyone expects to be be perfect–that they need to be perfect–goes irretrievably wrong.

Finally, I’ll note that could be argued that the overall message doesn’t offer any great compliment to men. (Which reminds me – we should talk about Scott and Bailey sometime.)

So, you might ask, what is cool about it? First, it is intricately scripted, in that way that allows one’s writerbrains to endlessly pick apart its pieces. Second, the husband and wife are interesting characters: flawed, believable, and in a situation you’ll absolutely buy. The avalanche invites you to ask: would I rise to the occasion? The film also examines traditional gender roles within marriages with kids. It drags to light a pretence parents in conflict sometimes maintain, for their own sanity–to wit, that their children aren’t aware of and aren’t affected by the fighting.

There’s humor, too. You won’t have a three-minute side-splitting belly laugh watching this one, but you’ll guffaw, more than once.

The avalanche scene and its after-math are filmed in a way that is singularly mind-blowing.

Ultimately, this is a movie about how honesty is hard. The main character has been building up a little pile of (mostly) unimportant lies around himself for years. Then he tries to get away with something bigger, because he’s desperate to cling to a little self-esteem. It doesn’t work, and he tries to brazen it out when it’s obviously not working. As he does, he sledgehammers the foundations of his marriage.

In a U.S. movie, this weaselly alpha-male would be played by Greg Kinnear.

The ski footage and the scenery at the ski hill, in the French Alps, is amazing and there’s lots of attention lavished on how the slopes are groomed–on how the entire ‘natural’ experience is artificially constructed. (The avalanche itself is a controlled fake, triggered by one of the mountains’ safety devices.) This is set against the family’s nightly grooming rituals: brush teeth, wash face, visit toilet. I’m not entirely clear on whether the director was saying that the basic human hygiene is also a construct, and essentially fake. But I am grateful to everyone who practices it, all the same.