Stories and books can have a figuring it out stage for me, a point – or, sometimes, several points – where I haven’t quite figured out how to proceed with some important piece of the work in progress. In some cases, if the problem is plot, it can feel like I’ve painted myself into a corner.

When I get into that space–this generally happens at least once with every short story and several times with longer works–I do a lot of walking  and thinking, as well as a certain amount of sitting around in the hot tub at my condominium, dictating my scattered thoughts thoughts into portable devices of some kind. It’s how this particular blog entry is getting written: with a phone dictation program as I bob among the bubbles. Truly, we should all have such problems.

My inner supervisor is never terribly impressed with this. Wondering around taking photos will always feel like lollygagging, and as for hot, luxurious soaks with a blurry view of the CN Tower? Well, that’s just decadent. Where do you get off having a hot tub anyway, it asks, who do you think you are? Go do some real work!

It never seems to cut ice with that particular slice of my brain to argue that it always works out; the faffing about and distraction do whatever they’re supposed to do, the answer comes, the story gets finished. And I hear variations on this theme from other writers: they get to the bashing the head against the wall phase and it’s strangely painful. For some of us, it can feel new every single time. Each time, we wonder if it really truly is some kind of brain breakage, or writerfail. Have we lost the old magic?

Fortunately for me, the lure of a good walk and the siren song of a bubbling tub are just plain louder than the internalized screechy voice that seems to think the answer will come if I sit at the keyboard until I bleed from the eyes. And I can look at pieces where I remember being momentarily mired. I scrapped “Wild Things”

in its entirety and began again from scratch, with a very different voice and point of view, and it became something wonderful and surprising.

What do you do when you are stuck?

Something I’m trying to do right now is work up a list of all the questions I–and other authors–get asked on a regular basis. These are questions my students ask me, or that come up in conversations at readings or launch parties or what have you. I want to gather up piles of them: twenty questions, thirty, even fifty. I want to tidily sort them into piles by their general intent: are they craft questions? Genre questions? Process stuff? Are they about selling, marketing, and the publishing biz?

Here’s the quick and dirty list I’m using to get started, in no particular order. It’s essentially a rundown of the things I’ve been asked in the last month or so, at places like SFContario and in the classroom.

1. Where do you get your ideas?
2. Why should/shouldn’t I self-publish my book?
3. Should I be writing short stories or novels if I want to build a career?
4. How come I hear people saying my new novel should never have a prologue?
5. Is it automatically YA novel if the main character is between ages 10 and 16?
6. So you write a book (or so) a year… are you really disciplined then?
7. Should I do NanoWrimo?
8. “Is said really an invisible word?” she grumbled petulantly.
9. What made you decide to write genre fiction?
10. Isn’t whether or not you sell a book mostly dependent on who you know, or your Twitter following?
I welcome any and all additions to this list. 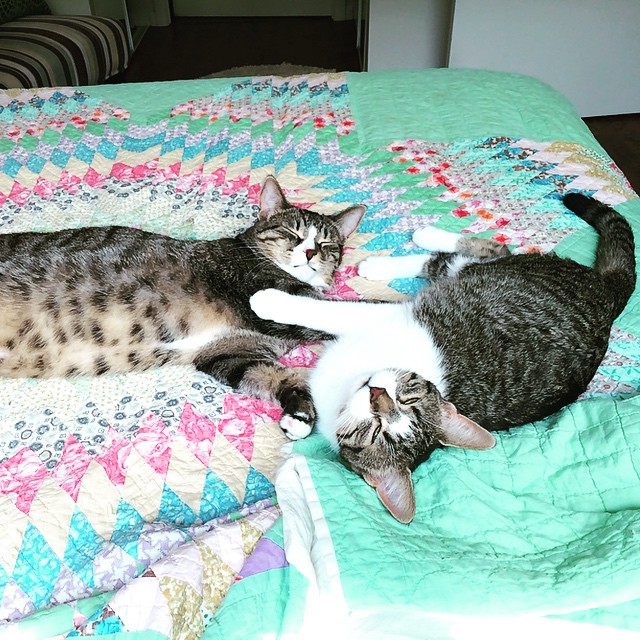 If you happened to be outside my front window right now, this is what you would see. (Please don’t step on my flowers while you are there, you mad stalker! I actually got some bulbs going that the squirrels have so far neglected to eat.)

My birch trees are busting out fine new leaves, perfect little chlorophyll-laden shapes, with edges like serrated knives, and I have been writing Novel Writing III critiques about a meter from the bird feeder, which is exceedingly popular with the local sparrows.

Yesterday tasted of summer. It was bright and sunny and the house got a little bit stuffy. You could walk outside in a dress. No tights, no coat required. Kelly and I strolled out through a cherry blossom-infested U of T campus to Bloor Street, and a matinee of the film adaptation of Far from the Madding Crowd

. This was a speed version of Thomas Hardy. Look, a girl! Look, a boy! Another boy! A third boy! Unhappiness! Misery! Woe! Boom! Conveniently, we’re now back to one available party representing each of the sexes. Someone read the damned banns already.

To sum up my emotional reaction to this particular costume drama: the horses were pretty and nobody got hanged.

We came home, waited for it to cloud over, and climbed into the hot tub. This enabled me, later, to phone Vancouver, say “Thank you for giving me life!” and proceed to brag about how awesome a day it had been.

Today it is cooler and foggy.

I have a schtick on Facebook whereby I’ll often give the cats (whom we adopted 358 days ago, I’ll have you know) super-sekrit spy names for the day. Moose and Squirrel. Joe Dick and Billy Talent. Laundry Chicken and What’s Going On? Today it was Johnny Fever and Venus Flytrap, which has spawned a small conversation about whether anyone could successfully reboot WKRP In Cincinnati

and, if so, how? My position is that it would have to start exactly like the Battlestar Galactica reboot: Earth gets nuked, but Cincinatti survives. For obscure reasons (one friend claims this would be Johnny’s paranoia in action) the radio station was shielded against EMP.

Red Wigglers the size of Cadillacs would be roaming the Midwest, which makes it all seem like a mash-up with Dune.

Continuing on with the random, I am pondering a few fine linguistic details within the Stormwrack universe. A few of these came up when I was reviewing the copy-edit of A Daughter of No Nation

. I got a query about when I use “in Fleet” as opposed to when I use “the Fleet.” (Answer: ‘in Fleet’ when they mean the city, and the words ‘in Tacoma’ could be used just as correctly. ‘The Fleet’ when we’re talking about the subsection that is a navy: “We’ll be sending the Fleet around to see if you’re in compliance with the Treaty.”) I had been doing this correctly but without conscious thought.

And here’s something that doesn’t happen to literary writers all that often: I had already known that the portions of the Hidden Sea Tales that take place on Stormwrack (as opposed to in San Francisco) were playing out, linguistically, in Fleetspeak. This means that those scenes played out in Fleet and were translated, by me, into present-day English.  This is something that’s essentially invisible to everyone but my wacky imagination, but it became something of an entertaining conceit through the copy-edit process.

Them: “Here’s another another foreign word.

Me: “Yes, that one’s Erinthian. Obvs. We can italicize that.”

None of which actually happened face to face, you understand. I’m describing a process of me talking to pencil marks on a 600-page manuscript that is now, blessedly, wrapped, taped, bar-coded and in the hands of Canada Post.

The c/e did a meticulous, thoughtful job and I’m so fucking grateful you can’t even imagine.

Finally, I am groping for a verb  I can noun (or a noun I can verb) to describe a particular element of the magical inscription process, whereby a spellscribe takes an existing spell and creates a variation on it. I played with embroidering, but it’s long and unwieldy and not quite right. The embroidered spell? A broidery?

The closest equivalent to the variation/embroidery process would be someone taking a fiddly gourmet recipe and creating an undeniably different–but recognizably similar–food. Going from curried plantains in coconut milk to… maybe something with green mangos?