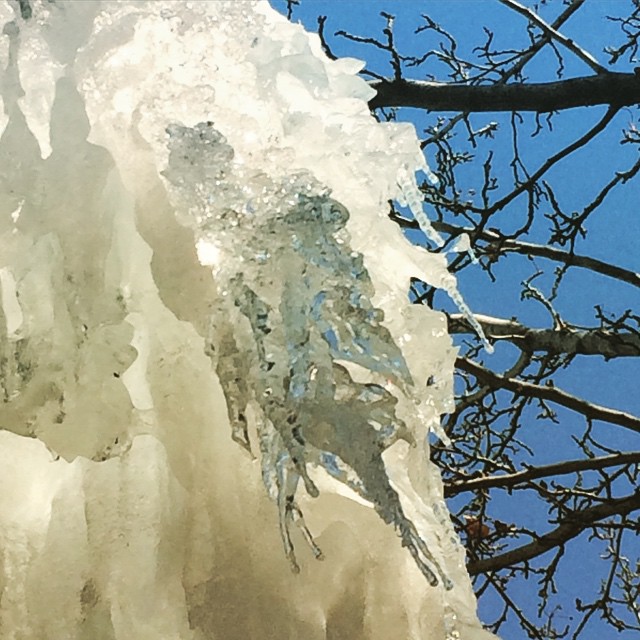 In the past week the temperatures have swung up above freezing. The icicles I’ve been photographing everywhere have vanished, and the snowdrifts are shrunken, dirty shadows of their former selves. Litter and other appalling, filthy things are emerging as they melt; this is one of the things I never loved about the end of winter, when I lived in Alberta. Still, the sidewalk-hoovers were out in force today, sucking up the crap. It’s unutterably cool to live in a city where the city pays humans to vacuum the sidewalks.

My Novel Writing II class is winding down. Final submissions came in yesterday, which makes this another week where I’ll write about 10k words of critique. (Novel III is up next, in the spring and there’s still room for a couple more writers.)

Kelly and I went and wrote fiction at the TIFF Bell Lightbox lounge, Luma, a couple times last week, in the evening. They seem to have all the good things: tables big enough for two or four people to work on, good windows, caffeinated beverages, adult beverages, nibbles, desserts, and not-too-obnoxious ambient music. (Jimmy’s on Gerrard, I am looking at you.)

The Lightbox is about a ten minute walk from our place, and my dream (one day I’m sure we’ll make it happen) is that someday we’ll follow up a writing date with an 8:00 p.m. movie of some variety.

Speaking of Kelly, her story “Good for Grapes” is out now in New Canadian Noir

, and can be found in an ever-increasing number of bricks-and-mortar and virtual bookstores. Corey Redekop is doing mini-interviews with a number of the NCN authors: here’s hers.

One Response to Toronto, Day 668