Here’s a picture of me with the actor Cineplex hired to Cap it up outside the theater after Friday’s screening. He was pleasant and fun, and who doesn’t enjoy a superhero selfie? 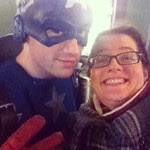 Things I liked about the movie:

Steve: I am coming to like his character more and more. He may be the straightest straight-arrow since Constable Benton Fraser… in other words, catnip. What’s more, he’s pleasingly articulate. His funny lines are delivered with square-jawed conviction and good grammar.

Natasha: The only thing wrong with Black Widow in this movie was her hair, which looked as though evil fiends had dried and ironed it in a bid to lower her self-esteem. She’s delightfully deadly, and I loved seeing a glimmer of how very much she looks to Steve and Nick Fury to hold her onto a moral path as she continues to sponge some of that red out of her ledger.

Falcon! Just plain awesome. I am hoping Tony will build him some hardware one day soon.

Surprise! I don’t think it’s a spoiler to say that hey, there are some big reveals at various points in Captain America: The Winter Soldier. One I saw coming, the other was beautifully played.

The movie has an excellent sense of who Steve is. It reaches back into his past, referencing the first film without burdening the movie with too much exposition. (Those reach-backs are especially handy if you found Captain America Primo rather forgettable.) I had a few quibbles with the plot, but it makes a reasonable amount of sense, as such things go. And I’m very curious to hear how the film’s events affect Agents of S.H.I.E.L.D.

In sum, I found it entertaining enough, and suspenseful enough. It may not be a staggering work of genius, but there’s nothing much wrong with it either. I had fun.